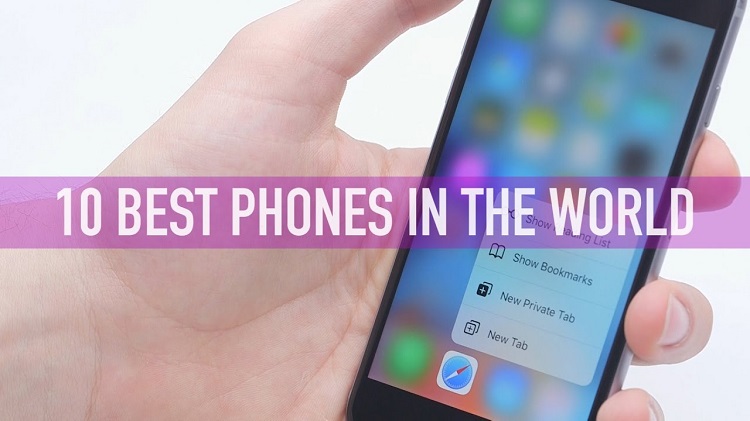 A new smartphone is like a new life – or something like that. The year 2017 has just come into the aisles, already hailing new top best smartphones 2017. That’s inspired the masses. Which smartphone could be at the top of the top ten, you will learn from us. One thing is clear, Apple will have it with the iPhone 8.

Sony has dropped by one with its Xperia XZ. It will be exciting when the Xperia XZ Premium will soon be launched. The predecessor convinced us at the IFA 2016 and the 5.2-inch smartphone is absolutely smooth in the hand. The Snapdragon 820 is still current, the FullHD display provides sufficient sharpness.

It is nice that Sony with the Xperia XZ again on the IP68 certification sets – other manufacturers like to use the red pencil here. In addition to the learning Xperia UI like the camera of the Sony smartphone. 23 Megapixels are flanked by a hybrid autofocus, laser autofocus, and a sophisticated camera app.

When it comes to the best smartphones 2017, the view must go to China. One of the absolute top smartphones is undoubtedly the ZTE Axon 7. In addition to the incredibly successful QHD display, the Snapdragon 820 with 4 GB RAM provides the necessary power. Thanks to LTE Cat 6, you can also travel quickly on the mobile network.

The Axon 7 compares to the competition with its front speakers. Dolby Atmos ensures a distinctive sound and who likes to listen to the music with his smartphone will be delighted. The 20 MP camera is neat and offers many small gadgets – we also like the 4K camcorder. Place 9 on the best smartphones 2017.

The Google Pixel XL defended its place in the top ten of the best smartphones 2017 – the successor is expected to the end of the year. Thanks to Android 7.1.2 and its convincing performance, the Google Pixel XL is worth a look, with USB 3.0 support, USB Type C or LTE Cat 11.

As with the ZTE Axon 7, the Google Pixel XL is also an eye-catcher. Thanks to QHD resolution, this smartphone is as made for the use of VR glasses. Even more enthusiastic are we from the camera. Sharp images can be achieved even in low light, the picture quality can be described as outstanding. Place 8 in the top ten is safe.

The Huawei Mate 9 promises perfection in rink culture. The 5.9-inch display should seem to some users as too powerful when it comes to the colors or the brightness, but there are no two surveys. The equipment leaves nothing to be desired: LTE Cat12, DualSIM, Android 7 or even Bluetooth 4.2.

The Huawei Mate 9 could get you excited, so we’re wondering why it’s not the best smartphone in 2017? We personally lack IP certification in times when the smartphone is the constant companion – also on trips, at the lake or generally under the open sky. So, it is enough for 7th place.

What are the great advantages of the OnePlus 3T? It is, of course, the combination of the offered hardware and the small price. For around $450, smartphone lovers get an absolutely huge device with a FullHD AMOLED display as well as the Snapdragon 821 and 6 GB RAM for a liquid performance.

The camera with Sony sensor convinces and also offers an optical image stabilizer and 4K videos. Compared to the Huawei Mate 9, here the price is the decisive factor for the better prednisone tablets online placement because the OnePlus 3T is also missing the important IP certification for us. Nevertheless, it is one of the best smartphones on the market.

Even the Huawei P9 had earned its place among the best smartphones 2017 since the Huawei P10 cannot be missing. The unibody made of metal gives the P10 a very noble look, the eight cores of the Kirin 960 with 4 GB of RAM provide for more than liquid performance – the EMUI 5.1 surface is already very appealing.

The display only works in FullHD, but with 5.1 inches it is enough if you are not necessarily an ardent advocate of Virtual Reality. For this, the camera is again the showpiece and again was combined with Leica – strong! Small Ran fact: The Huawei P10 probably has the fastest fingerprint sensor and is therefore ranked fifth.

The most popular smartphone manufacturer in Germany? Here, Samsung is clearly ahead. The Samsung Galaxy S7 once again set new standards and in addition to the convincing appearance and the resulting value, the Exynos 8890 is up to 2.6 GHz, which leaves nothing to be desired when it comes to a good performance.

The IP68 certification is also included, the memory is expandable and the camera will convince you completely. Megapixels are not a real benchmark, because, with larger pixels as well as additional apertures, the 12 MP camera is enough to shoot strong photos at any light. The Galaxy S7 is definitely one of the best smartphones on the market.

The iPhone 7 Plus is a little better than the Galaxy S7. Apple is simply a bank when it comes to optics, processing or haptics. The A10 processor provides powerful power, the display is brilliant when it comes to viewing angles, colors or brightness – if only the price would not be.

On the other hand, iOS 10 is very successful. The operating system is never a cause for criticism. Apple also in this case also to an IP67 certification, which pleases. The dual camera on the iPhone 7 Plus, which is equipped with a wide-angle and telephoto lens, is worth mentioning. Those who are 5.5 inches too big can also grab the iPhone 7 with 4.7 inches.

At the end of 2016, we selected the Samsung Galaxy S7 Edge as the best smartphone of the year. Basically, the device differs hardly from the Galaxy S7, but it is the small subtleties that make the difference. The rounded edges are just great fun and with 5.5 inches it is slightly bigger than the little brother.

The edges of the display can be controlled by the Edge UX and it is practical that Samsung has installed small functions here – applications such as contacts or apps can be accessed. The battery is convincing, the display is top and thanks to the small adjustments it is currently enough for the second place of the best smartphones.

The new Samsung Galaxy S8 is still quite fresh with its huge 5.8 inches, which are kept in check by a side ratio of 18.5: 9. What shall we say great? The display is without competition, the Exynos 8895 a heavyweight and the camera certainly deserves its own article.

Samsung has basically done the Galaxy S8 everything right and the smartphone still extras with the way. The Iris scanner is top and with the language assistant Bixby as well as the DeX dock there are appealing added values. If you like it bigger, the Galaxy S8 Plus and both smartphones have nice edge edges. For us, the Samsung Galaxy S8 is the best smartphone on the market.

How To Play Caf Files On Android

How to find parent directory in windows operating system

How To Tell If Curtains Are Flame Retardant